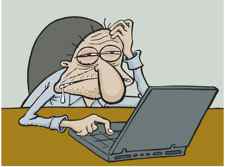 As competition heats up and sales start to stagnate, companies often seek to breathe new life into the brand through rebranding. In all too many cases, however, those expensive rebranding efforts fail to yield the desired business results. Here are some of the key reasons why rebranding often fails. More than executional mistakes that blunt the effectiveness of rebranding efforts, these are critical errors that almost always lead to failure.

Sure, sometimes rebranding is done solely to sharpen the image of a company or brand; periodically things need to be freshened up. However, unless you operate in the world of packaged goods, don’t expect great things from launching some new designs and fresh copy.

Rebranding signals change. A new image will cause people to take a fresh look at you—and people’s primary motivation in taking a new look is to see what’s changed. If you’re the same old place dressed up in new wrapping and ribbons, you’ll merely confirm the existing position you own in their minds. You’ll have wasted a valuable opportunity to change their perceptions. There are only so many times your prospects are going to reconsider you. Use them wisely.

Making Too Big A Leap

Rebranding should be about truly changing perceptions in the marketplace, changing the position you own in people’s minds. That position, however, isn’t dictated by you. It’s based on what others believe about your company; it’s something granted by those in the marketplace.

Corporate insiders often lose touch with reality and begin to believe their visions of market dominance. Marketers and corporate executives get consumed with what they would ultimately like the company to be versus the position it can reasonably attain in the marketplace at the present time, i.e., the next permissible step in the company’s evolution. When rebranding, keep your primary focus on the achievable, not the aspirational. If you make too big a leap, your market won’t believe you.

If rebranding is an initiative implemented solely by the marketing department, it’s likely to fail. As noted above, rebranding should signal change—and that change should be evidenced throughout the organization and conveyed through every brand touchpoint. That includes sales, finance, engineering, customer service, manufacturing…basically everyone.

A brand is the sum of perceptions people have about your company and its products and services. Ultimately, a brand isn’t something you have; it’s something you do. Actions change perceptions. Words and images rarely do—unless they’re backed up by actions that support them.  Unless everyone throughout the organization understands and delivers on the promises implied by your rebranding, not much will change. In fact, you’ll probably do more damage than good. Better to do nothing than imply a promise and not deliver.

Failure of the CEO to Champion Rebranding

While rebranding may be born in the marketing department, unless the CEO is the champion of that effort, it will likely die there, too. It is not enough for the CEO to “support” the effort from the corner office. The CEO is the only one that can drive change in all functional areas of the enterprise. As the chief branding officer, the CEO needs to set the vision and lead the charge, ensuring that products, services, people, and resources are aligned to deliver on the promises implied in the rebranding.

Rebranding should always clarify and refine your positioning. Your goal in rebranding should be to make it easier for customers and prospects to understand exactly why your company should be one of their top choices, why there are few credible substitutes for your company in the market. This isn’t the place for puffery. Merely claiming to be the best is meaningless—and using empty words like “best value” and “exceptional customer service” do nothing but create more skepticism.

Use rebranding as an initiative to force you to focus, to better define and support your expertise in a clear and compelling manner. Doing so will require you to draw tighter boundaries around your stated expertise—and that’s likely to scare you. Conventional wisdom is that more generalized positioning gives a company more opportunities. The reality is generalized positioning positions a company as, you guessed it, a generalist. To win business, generalists have to not only win over other generalists, they have to also beat out specialists. When rebranding, if it doesn’t scare you, it probably won’t create meaningful change in your organization or in the marketplace.

1 thought on “Why Rebranding Often Fails”